In 1984, a young bottle-nosed dolphin started to appear at the mouth of Dingle Harbour. The now world-famous dolphin has remained in Dingle since, and has become both a friend to the locals and a great “attraction” for visitors.

Christened “Fungie” by the local fishermen, the male dolphin lives and plays within a small area at the mouth of Dingle Harbour, overlooked by the lighthouse. A small cave under the cliffs at Burnham is thought to be his home, and from dawn till late night, Fungie is always around to welcome boats, trawlers and yachts to the Town. He is a curious and friendly animal, and has been photographed bringing gifts to divers of still living fish, clasped gently within his jaws. But to show his freedom, Fungie never accepts gifts from divers, or fish thrown from returning trawlers.

Fungie rarely ventures far from the mouth of the harbour, a fact that has baffled scientists and specialists. A simple explanation given is that at the time of his arrival, the body of a young female bottlenose was washed up locally. Dolphins are thought to show great fidelity in their relationships, and may only have one mate for life. Every June and July, schools of dolphins are to be seen in the area, although usually further offshore, and once or twice Fungie has been seen playing with these groups. His much-publicised fling with a young dolphin, named Smokey, was expected to cure his love sickness. Unfortunately, Smokey left, and Fungie stayed.

It is rare that humans can interact with these beautiful animals, but Fungie has swam and jumped and played with us. He has remained wild and free, existing in his own area at the mouth of Dingle Harbour, playing in the bow waves of boats and launching himself out of the water to startle and excite the crowds. He has warmed the hearts of the thousands of people that have travelled from near and far to see and swim with him.

Boat trips to see Fungie leave from the top of the pier in Dingle Town. Trips last approximately 45 minutes. There is a money back guarantee if our friend fails to appear, but don’t worry as this guarantee has never had to be paid out! 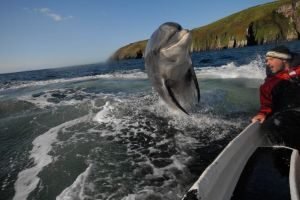 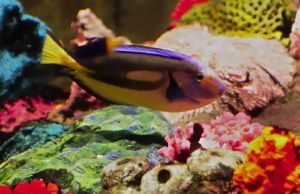 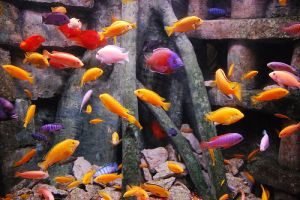 Ocean Tunnel: Walk through our under water experience and see the fish swimming above and all around you. This is quite simply a marvelous experience as you come eye to fin with the amazing sea life in the tank. The large fish in this tank are our conger eels, in the Ocean Tunnel you will also encounter species such as Pollock, crawfish, plaice, turbot and cod.

Wave Tank & Rock Pool: Our Wave tank has a continual wave motion to stimulate natural conditions for it’s inhabitants who are commonly caught by fishermen off our coast. Her you can find trout, bass, bib and turbot. The waves of this tank lap at the rockpool. Many creatures live in the rockpool with its rocky shores and adverse conditions. Some of the sea life in this tank are edible sea urchins, starfish, velvet swimming crab, hermit crabs. Rockpools are also home to brightly coloured sea anemones.

Touch Pool: One of the highlights to our Aquarium is our Touch Pool, where you get a chance to interact with all types of fish. Get a chance to hold a starfish and learn amazing facts about how it lives, stroke the rays and flat fishan experience they seem to enjoy and they will often return to be petted again. Other fish in this tank which you can interact with are box crabs which are the largest crabs to live off the Irish coast, monkfish and skate. The flatfish have a very effective camoflage and they can bury themselves in the sand to avoid being eaten by predators.

Shark Tank & Tropical coral Reef Display: In our state of the art Tropical reef display is home to 8 Tropical Reef SHARKS – 4 Blacktip and 4 Whitetip Reef Sharks. These sharks are not man eating, but certainly look the part with large powerful jaws and protruding teeth. You can experience up close the sharks as they swim through the beautiful colourful Coral Reefs. Around the reefs are thousands of tropical fish. The warm water of this tank is the perfect environment for our Loggerhead Turtles, these turtles were washed up on the Irish coast, cold and lost, having come from warmer waters of the gulf Stream. Staff here at the aquarium have nursed the turtles back to full health and will soon be released back into the wild.

Gallarus Oratory was built between the seventh and eight century and is the best preserved early Christian church in Ireland. It represents the apogee of dry-stone corbelling, using techniques first developed by Neolithic tomb-makers. The stones were layed at a slight angle, lower on the outside then the inside to allow water to run off.

According to local legend, if a person climbs out of the oratory via the window, their soul will be cleansed. This is, however, physically impossible, because the window is approximately 18cm in length and 12cm in width.

Gallarus Oratory – Simple and stunning in its own right, this superb dry stone oratory is in perfect condition, apart from a slight sagging in the roof. It has withstood the elements for nearly 1300 years. It is one of the most famous buildings in Ireland and is built of large cut stones neatly fitted together with walls angled from the base to a corbelled roof whose gable ends also lean inward in a curved batter. It is compared in appearance by many to that of an up-turned boat. The corbelled stones slope slightly down towards the outside to help the rain run off. The doorway at the west gable end is lintelled with sloping jambs. 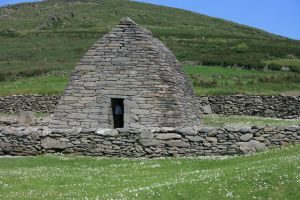 On the inside over the lintel are two holed stones to support a wooden door. The east gable has a small round-headed window splayed on the inside. Although mortar was in use in the 8 th century, there is none used in this type of oratory. This style of oratory is peculiar to Kerry in the southwest.

A small cross-slab stands at the east end of a bed of stones beside the oratory. An equal armed cross within a circle occupies the upper part of its west face. A further inscription beneath the cross does not form any recognisable pattern.
Gallarus Oratory visitor centre is located on the Dingle Peninsula. The centre has been established for some years now and has seen many visitors from all over the world pass through it year in year out. The centre offers visitors the opportunity to explore Gallarus Oratory and also see a Audio Visual display of the surrounding area. There is a shop offering souvenirs and some refreshments located in the main centre. 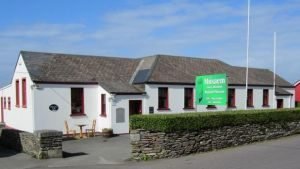 The museum is in the old schoolhouse in Baile an Fheirtéaraigh (Ballyferriter), 13km (8 miles) west of Dingle (just across the road from the Catholic Church).
We also have a café with freshly baked scones and other treats available each day, and also a book shop which stocks a range of books of local interest, as well as books suitable for learners of the Irish language at all levels.
Beidh fáilte romhat!

Díseart is next to St. Mary’s Church in Green St.

Its beautiful gardens, open to the public, its chapel with world famous Harry Clarke windows, its Nano Nagle Room with Nano’s life in striking murals; the only buon fresco in Ireland, The Last Supper, in the former sisters’ refectory painted by the American artist Eleanor Yates who has painted some smaller works in St. Mary’s Blessed Sacrament Chapel and in the presbytery.

Some copies of the Great Books of Ireland are on display also in Díseart, as well as books published by An Sagart which has its offices in Díseart.

The up-to-date classrooms of the American and local students who study in Díseart are also of interest. 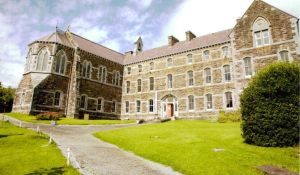 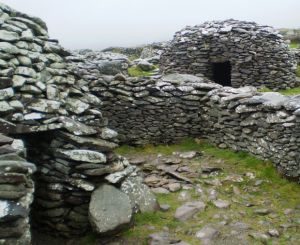 Dunbeg Fort Archaeological Site & Audiovisual Centre. Built in the Iron Age, Dunbeg Fort is an impressive and elabourate example of a promontory fort.
Its location makes it one of the most dramatic archaeological sites on the Dingle Peninsula. It is built on a sheer cliff which projects South into Dingle Bay, at the base of Mount Eagle on the Slea Head Road.
The Visitor Centre above the Stone House Restaurant features a 10 minute audio-visual presentation on the history of Dun Beg Fort. The Audiovisual is available in a few different languages; including English, Irish, French, German, Spanish and Italian